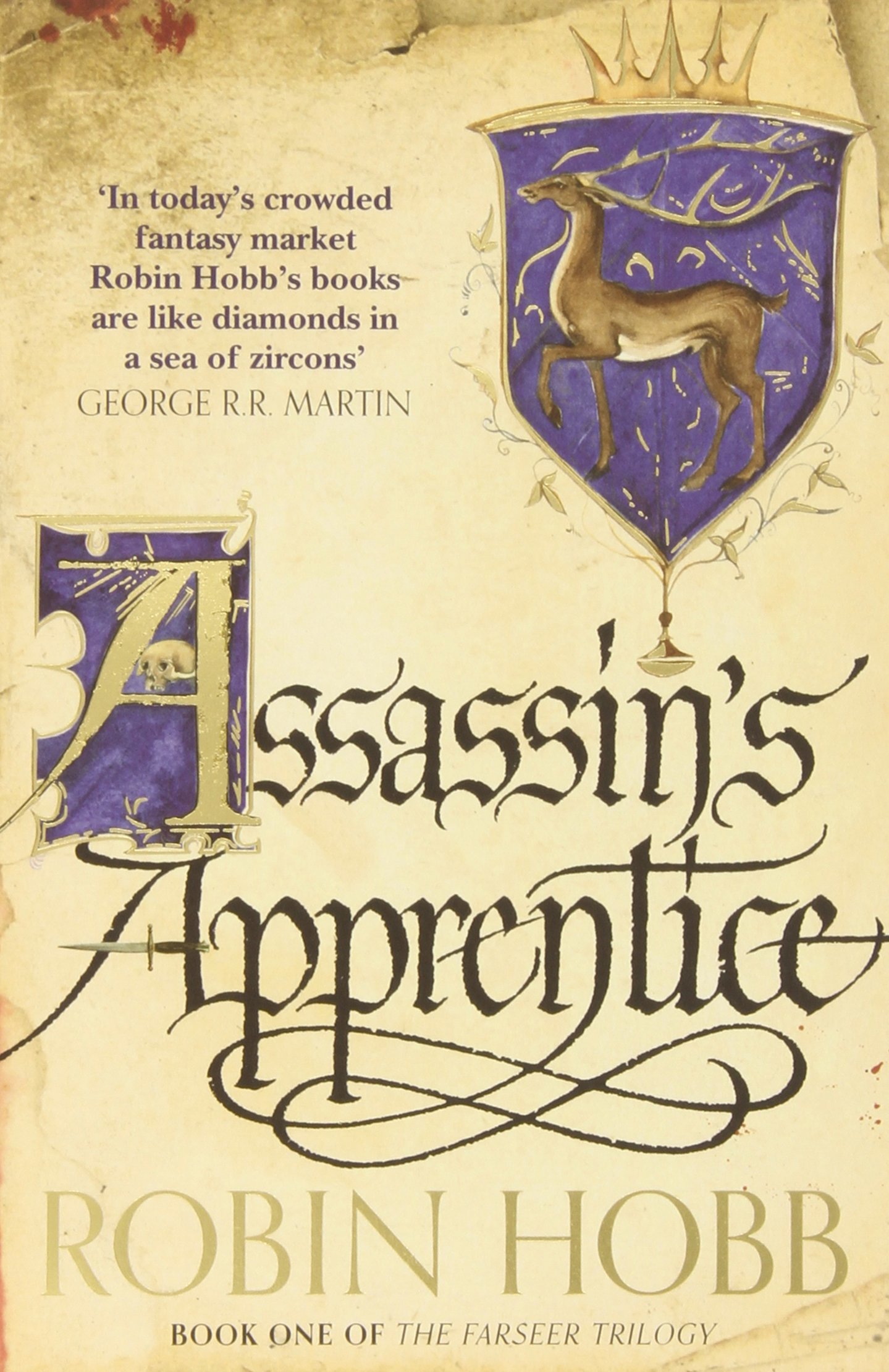 From the back cover: “The Kingdom of the Six Duchies is on the brink of civil war when news breaks that the crown prince has fathered a bastard son and is shamed into abdication. The child’s name is Fitz, and he is despised.

Raised in the castle stables, only the company of the king’s fool, the ragged children of the lower city and his unusual affinity with animals provide Fitz with any comfort.

To be useful to the crown, Fitz is trained as an assassin; and to use the traditional magic of the Farseer family. But his tutor, allied to another political faction, is determined to discredit, even kill him. Fitz must survive: for her may be destined to save the kingdom.

On my recent holiday to Croatia with Emily, I failed to anticipate my hunger. Not just my inability to resist eating everything—and I do mean everything—in sight but my appetite for reading, as well. Once I’d devoured the two books (A Clash of Kings by George R.R. Martin and Elizabeth is Missing by Emma Healey—both excellent) I had taken with me, I found myself in a Dubrovnik bookshop, overwhelmed by a large wall of books printed in English, devoted entirely to fantasies and thrillers. I’m a picky book buyer, so this encouraged me to consult Goodreads for some Fantasy recommendations (after all, my novel is part fantasy, so I should broaden my reading of the genre) and my ever trusty companion, Amazon, for book ratings. Assassin’s Apprentice ranked highly on both; on Amazon it received 4.5 stars from 846 reviews! It instantly became a priority to-read but I had to settle for another choice, The Name of the Wind by Patrick Rothfuss, until I returned home. So how did it fare compared to its staggering expectations, including my own?

The opening chapters initially intrigued, gripped and pampered me. But I soon became an indifferent reader… Two summers ago, James and I travelled to Anglesey, North Wales for a long-weekend away with our parents. The backseat of Dad’s car was reserved for the dogs, who naturally took precedence over us, so James and I squeezed into his old silver Toyota. On our first day, we drove through Snowdonia. It wasn’t long after the first gradual incline that we found ourselves on the mountain roadside, the Toyota’s bonnet gaping like a panting dog’s open mouth, airing a slightly smoking engine. We stood outside the car, fortunate to be stuck in a valley smacked with sun and swathed in green, and took in the colours of the vast surroundings. After a few encouraging engine splutters, we were on our way again—until the next incline. Then it was back to the roadside. By early afternoon, we’d made little progress. The little progress we had made was due to the few engine-saving downward slopes. However, there was always another ascent around the corner. Literally. Fortunately, on the final leg of our journey, we made good progress, no doubt made through sheer will than engine power, and we were rewarded with a most spectacular view that was made even more impressive by the arduous journey taken to behold it.

Reading Assassin’s Apprentice was a similar journey. Slow, often staggered—more than once I found myself stuck in sluggish narrative, hoping there would be a burst of downhill pace on the next page—yet, by the close of the cover, undoubtedly gorgeous; an excellent ending made more enjoyable by the journey taken to reach it.

Unlike my brother’s car, Assassin’s Apprentice didn’t owe its trickling pace to an aged overheating engine but to a first person narrator (Fitz) whose dense style was often too reportage: my biggest gripe is that it offered limited dialogue. While Fitz’s narration makes the story paced instead of pacey, it does permit the growth of a complex plot, one that becomes more convoluted the nearer the climax. Every now and then, seeds of mystery are released, until the story blooms with sudden, satisfying ferocity.

This is largely owed to what came before it: Fitz’s focus on characters. Much of the book’s first half is devoted to his relationship with them, all the while constructing a rich world around them. While some characters appear as briefly as a dragonfly zipping by, others are more prominent, either in the narrative or in the reader’s heart. Burrich is one hard not to instantly love, with his blind devotion as Fitz’s unrecognised surrogate father; though his character is contrasted by his stubborn and conflicting beliefs, which often cause a heart-hurting strain on their tenuous-yet-rooted relationship, one they are both dependent on. The Fool, introduced as a seemingly inconsequential character, destined for the story’s background, within a scene becomes one of the most intriguing characters, as well as, presumably, pivotal — his role and real character obscured until the sequel.

Hobb doesn’t create black and white characters, but rather ones in deep tones of grey, much like George R.R. Martin’s characters in A Song of Ice and Fire. Like Martin, Hobb’s relationships between characters are rarely instantaneous and are often challenged, and she is not afraid to make them suffer, over and over, developing them from their consequences and suffering, adding to what begins as an already shadowed plot.

Fitz offers quick immersion into a dynamic world, one I always wanted to know more about, steeping the reader in its colours and details, as if dipped into the very pages themselves. Although I completed Assassin’s Apprentice at a slower-than-usual rate, the combination of colourful characters, vigorous world-building (which feels like only the tip of the iceberg) and the exciting climax is what changed me from an indifferent reader to one who will definitely return for the sequel, Royal Assassin.

(Although the breakdown ratings average just lower, the book’s strengths deserve the rating to be rounded up.)