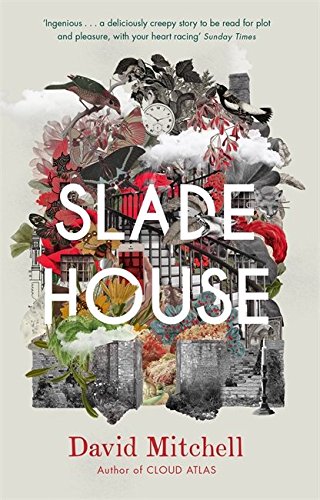 From the back cover: “On one side of a high wall lies a narrow, dank alley; on the other, a sunlit garden; and between them, a small black iron door. You just need to open it. Welcome to Slade House.“

[That doesn’t reveal much. Basically, every seven years on the last Saturday of October, a mysterious house summons unsuspecting pre-chosen ‘guests’ to its door. Bish, bash, bosh, a little more context.]

I met David Mitchell in the winter of 2013, at the start of my MA, when he came to my university (Kent, Canterbury) which had also been his some decades before, to give a speech and a couple of readings. He was relaxed, witty and charming. Afterwards, outside one of the largest lecture halls, which had never been so well attended, [and I don’t think that was solely because his talk started in the PM rather than the AM] I queued so I could have him sign my copy of the first book I ever read of his, number9dream (I consider this to be his best work). I waited for a good forty-five minutes (Mitchell was very generous with the time he spent with his fans, quickly and uncaringly overrunning his allocated time) in a queue predominately made up of girls. This didn’t phase me; what phased me and kept me glancing at my watch was the fact I had to be at the other side of campus to deliver the first korfball (don’t ask) taster session. Before making a quick dash, I managed to get my copy signed and share a few words. I felt my voice shrivel, like a pavement-abiding apple core. I didn’t think that would ever happen to me, to actually be “star-struck”. Hey, I’m only human. Mitchell is, without a doubt, an inspiration: an author of enormous talent, whose poetic prose is reason enough to open one of his books, who just so happened to go to the same university as me. Between number9dream and Slade House, I have read every other book he has written. There, my bias laid bare.

I can enjoy any book by any author if I can take away something from it, be it an inspirational writing style, well-developed characters, original story, a strong plot, or if it’s good entertainment. Usually, with a Mitchell novel, you hit them all. (Really, I’m not biased!) He’s a well-rounded author and his books are well-defined, even though characters (often minor) pop up in other books, sewing unconnected stories into a single universe, much like the MARVEL films with their shoehorned cameos. But what brings me back, book after book, is his elegant prose. It’s gorgeous. He crafts vivid images, from describing a character’s eyes as apple-pip brown to comparing sunlight to a harpsichord. He actually makes you hear sunlight. This is easily his shortest novel at a slim 233 pages (I suspect it’s below the 80,000 minimum novel “requirement”, thanks to larger-than-usual line spacing, which explains my two-day sitting) but it drips with delicious prose.

Like all of his books, Slade House has a multi-narrative structure which follows various characters from several decades, all narrating from their perspective—this adds nicely to the mystery, especially the disbelief. Whilst each character is laced with Mitchell’s stylish prose, they remain unique from each other; from a socially awkward boy scarred mentally and physically by a past dog attack; to an ageing, openly (at least to the reader) racist detective; to an overweight and self-conscious nineteen-year-old girl. While one or two came across a bit cliche at times, each was colourful, gripping and entertaining. Despite the horror-style of the story, they all found time to be humorous, even if unintentionally. This added nicely to their personalities and to the book’s, too.

The story is purposefully repetitive; even though each narration falls on the last Saturday of October in a nine-year cycle, it’s enjoyable to read different characters falling into the same traps and unusual experiences of their predecessor. At first, it’s like spotting the giveaway hints in a whodunnit. Although it leaves the plot a bit thin, the repetition didn’t become boring (the novel was too short to allow it) but added to the entertainment value; although a little predictable, there was enough variation. There was also the odd curve-ball thrown in to keep the reader attentive.

The actual mystery (slight spoiler ahead, ye be warned) is nothing more than an updated version of the vampire, which is an idea explored in his previous novel, The Bone Clocks. (Not that you need to have read it beforehand, it’s just set in the same world.) Despite the saturation of these toothy fiends in modern culture, Mitchell’s take on them is still refreshing. Their only let down is the “vampires” themselves, who appear in each narrative. Like an old-style Bond villain, they clunkily give away too much exposition in their dialogue, especially in their first few reveals. Seeing as there is the occasion for a more organic reveal of what’s going on in one of the later narratives, I can’t help but feel it would have been better to save the contents of this dialogue for then, in order to deliver a bigger pay-off and to keep the reader mystified for longer.

Slade House was another enjoyable, if short-lived, read from David Mitchell. It’s perhaps not as thought provoking or as inventive (this is credit to his imagination) as his previous novels, and the mental after-punch you get after finishing certainly doesn’t lost as long, but it is another exceptional work of prose with a refreshing, entertaining story and relatable, rounded characters. As always, he’s left me hungry for his next one. As an introduction to Mitchell, it would be perfect.