This month had to go well. I had to fill it with words. Lots of them.

Not a bad start to the year.

December was a difficult month. For me personally and for my writing. (The two often influence each other.) I wanted to write a December post—especially after how challenging-yet-therapeutic I found November’s—but I was struggling to find the correct words. Again, for me personally and for my writing. It reached the point where the idea of talking about either seemed more of a hindrance than a help.

Instead of talking about writing, I needed to just write.

So I did. Nearly every day. And it’s helped me feel a lot better. For me personally and for my writing.

This is the first month (since I’ve resumed writing) I’ve set myself a word target. Only… I didn’t quite set an amount. Usually I multiply the estimated writing days by a thousand words, as a thousand words seems like a reasonable amount to achieve in one day. It’s a nice round number with lots of zeros and enough wriggle room on either side that doesn’t make me feel depressed if I fall short of it but does give me a sense of accomplishment if I exceed it.

Only… I’ve not been writing full days. I’m fortunate enough to still be busy with work, which has meant the majority of my writing days have been writing mornings. (I’ve discovered teasing words from my mind is much easier in the morning than the afternoon.) Instead of aiming for a thousand words, I aimed for five hundred. (Even though I said I would never set daily targets again, that’s exactly what I did. Hey ho.)

I beat that by 2,575 words. Which, for me, is actually pretty good. 14,075 initially felt like a miserly amount compared to the 35,000 words I used to spew out over the span of a month. Yet, upon reflection, I realised I achieved nearly half(ish—let me have this!) that amount of words with nearly half the amount of time.

The most important thing, though, was that I was producing a fair amount of words on a regular basis. It took me a little time to gauge the correct balance between work, writing and the rest of my life (my anxiety melted once I re-adjusted my numberless word target), though I’ve been happy for some weeks with the routine I’ve been following.

This routine has included writing on the weekends. Not because I feel I have to, but because I want to. It can be hard on some Mondays to pick up the previous Friday’s thread of thought. Even by writing a couple of hours on Saturday and Sunday morning can help avoid that. I do believe, though, that it’s important to keep the majority of weekend time as just that—for me personally and for my writing.

Having word targets to aim for has also helped me cut down on two Bad Habits:

Bad Habit Two) Trying to replicate a voice that isn’t my own.

Both Bad Habits stem from my fear of failure. Writing this month has allowed me to readjust my expectations to be more in keeping with a first draft, opposed to a final, published draft. In other words, I’ve made my expectations more realistic by trying to recognise and alleviate the intense pressure I place on myself.

Writing this month has also helped me to discover the fine line between learning from other writers and replicating their voice entirely. (After all, if someone wanted to read Scott Lynch, they would read him, not someone who writes like him.) Sometimes I stray from the line, but it’s a start, one I feel I’ve already made good progress with.

One of the best feelings I’ve had from writing recently came last week when I achieved two back-to-back days of writing with a voice that felt like pure, untampered Tom. Unfortunately, I don’t know what I did to feel like me, or why the days afterwards felt less like me. But, unlike U2, at least I can say I’ve found what I’m looking for.

I hope to achieve more of those days in the following months. Having made a good start to the year, I just need to continue now by getting the words written. My target is to have a first draft completed by the end of the year. Thanks to January, I’m 14,075 words closer to reaching that target. Tomorrow, I’ll be even closer. 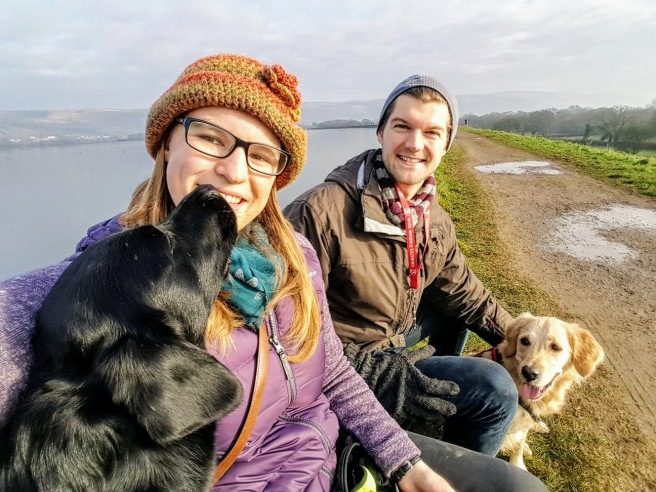 [Emily, Monty, Cassie and me at Cheddar Reservoir during our short holiday to Somerset. In other words, a wonderful start to the year.]