If this blog is the young boy with the floor-bound stare, then punctuality is the girl he is very cautiously overcoming his shyness to approach. Give him some time.

Having learnt that thoughts of ‘you still have plenty of time’ are in fact lies, I’ve at least published this month’s post a whole span [that’s eleven days, for you non-The Name of the Wind fans] earlier than last month’s…

Having fallen 735 words short of my 18,000 word count target for August, it made sense to keep the target the same for September. Achieve first, then aim higher, right?

This created a small sense of pressure. That special kind which settles in the back of your mind, loud and insomnious. There was no shame in falling short of the target once, especially not on the first attempt, but doing so for the second time in consecutive months….

By the end of the first couple of weeks I was five hundred words above the halfway mark. On some of the days writing had come… to say easily would be false—there’s always effort and there’s often difficultly—but there had certainly been a fluidity.

This is something outside of my control. No matter my attempts in trying to curate a better writing session, the good and great days are always determined by an unnamed magic. I guess that’s why writing is magic.

Maintaining those days is as equally and unequivocally outside of my control. I’m too used to them being as choreographed as the sun slipping behind cloud cover. That’s not to say it’s not frustrating though.

Come the start of the third week, the clouds convened to stitch together a robust blanket of many leaden layers. The sun knew better than to resurface.

OK, that’s a tad dramatic. But as I said, it is frustrating.

Writing certainly slowed. It was even sometimes sluggish. Perhaps tortoisesque would be a more apt comparative, as I plodded determinedly on.

Part of me would have been satisfied ending the month with anything above August’s amount, even if it was by a single word. Which is exactly what I had by the end of the final Friday.

A larger part of me wanted to exceed the 18,000 word count target.

I’d finished writing my August blog post on Saturday evening. I then remained at my laptop in an attempt to whittle down at least some of the remaining seven hundred words. As it was a Saturday evening, I didn’t expect to achieve very much. I thought whatever I could achieve would at least push me that much higher above August’s total.

I kept checking hopefully every couple of hundred—or, more often, fifty—words. Upon seeing that I was closer, I’d think, Keep going. Just get another hundred.

Sure, my writing turned sloppy, slapped-together as it was in a maddening rush of desperation, but I kept going. It was late evening by the time I finished writing, the time of foxes and owls and Match of the Day.

It was very important to me to meet that target. I was proud that I remained determined and continued writing when usually I would’ve stopped hours earlier (especially on a Saturday evening).

Not only did I prove to myself that I could meet the targets I set for myself, exercising that sort of commitment also gave me a hefty mental boost.

The realisation that my novel will no longer be titled Everborne formed much like a stalactite, fattening leisurely in the dark, drip by drip by drip, until the cool, slimy point of the tip was long enough to whack me hard in the middle of the forehead.

At 6’5″ and with a forehead equivalent to the White Cliffs of Dover, I make an easy target. But my point is this realisation, which is quite a large one, came gradually, unexpectedly and resoundingly.

The further I’ve gotten with my manuscript, the less the title Everborne seems to match it. It’s the same (sort of) as when you look at a person and go, “Nah, they don’t look like a James.”

That title has been with me for over six years, since I first had the initial idea for a novel in my third year of university. An idea which, six years of development later, is barely recognisable to the one I have now.

I won’t reveal what an everborne is—that’ll remain a secret, thank you—but it no longer remains at the centre of my story. At least not yet. I have an idea (which will no doubt change) of how it will fit in later on in the series. Who knows, maybe I will use it for a different title.

Though part of me somehow doubts that. The sound of the word ‘everborne’ no longer excites me like it used to. Perhaps the intervening six years has something to do with that. But it wouldn’t be the only reason.

Looking at my bookshelf for some of the contemporary fantasy novels that I’ve read over the past couple of years, there’s almost a pattern to the titles. See if you can spot it.

Patrick Rothfuss
The Name of the Wind
The Wise Man’s Fear (I especially like this sequel’s title.)

Joe Abercrombie
The Blade Itself
Before They Are Hanged (Again, that sequel’s title!)

George R.R. Martin
A Game of Thrones
A Clash of Kings
A Storm of Swords
A Feast for Crows

James Islington
The Shadow of What Was Lost (I can remembering thinking how great a title this was when I first came across it; I immediately had to know more.)

[You can tell by the incomplete trilogies and series that I have a lot of reading to catch up on!]

How about the titles of the novels I bought at the start of this week?

Promise of Blood by Brian McClellan

The Last Wish by Andrzej Sapkowski

Kings of the Wyld by Nicholas Eames

With the exception of Before They Are Hanged, all the titles include either or both a The and of. Many even adhere to the same formula of The [Noun] of [Noun(s)]. All of them suggest, evoke or kindle a question regarding the story. What does the wise man fear? What is the way of kings? What are the lies of Locke Lamora? What was lost and what is the shadow said loss has cast? Promise of Blood is exactly what it says (or promises—excuse the pun, but that’s what a title is, a promise).

While Magican by Raymond E. Feist, Uprooted by Naomi Novik and Blackwing by Ed McDonald might argue otherwise, I don’t feel a one-word title, such as Everbone, is as exciting, suggestive or evocative.

That’s not to say I have to adhere to the same pattern of The [Noun] of [Noun(s)] when choosing a new title. Of course, my brain has been scrambling to cobble together a new list of titles, or if not the wording of the title what element of the story the title could be named after.

However, I suspect I won’t be able to properly re-title my manuscript, or settle on a title for certain, until I at least have completed a rough first draft of it. It makes sense to discover the title as I discover the story.

As highlighted by the above list of incomplete contemporary fantasy trilogies, I need to get on with my reading.

Having slumped somewhat these past few months, my reading raised itself into a more regular routine, a slight improvement that in truth failed to skim the resemblance of my routine from the first half of the year, before slumping back more heavily into a drowsy state for a second time.

I’ve been re-reading The Name of the Wind as I wanted to set myself a challenge, one that’s perhaps more important than returning to my past reading routine: to see if I could read a book by an author whom I greatly admire without absorbing his voice.

I spread all 729 pages rather luxuriously over five-ish weeks, reading without the whip-crack haste of a first-time story-gobbler. This time around I was able to better appreciate how the story is stitched together, sponge up the minute details, and notice how Rothfuss builds his world from the first page onward. Invaluable lessons for an aspiring writer.

As for admiration (which there was plenty of) leading to imitation, I managed to avoid unintentionally adopting Rothfuss’ poetic prose until about the final week. While there are few better voices worthy of imitation, I still want to write my story in my voice, and I was pleased that I managed to do so for the first month. I’m still very much trying to maintain (in writing and in life) the philosophy of focusing on what you have instead of on what you don’t have.

There may have been another factor that caused me to stumble, but that’s for next month’s post.

Or it could have been that reading the same book after such a long length of time meant it was unavoidable I would begin to absorb Rothfuss’ voice. Another good reason to return to my speedier reading days! With my brother’s wedding (yup, two brothers getting married in the space of under five months) and mine and Emily’s Texan road trip soon approaching, hopefully I’ll find the time…. 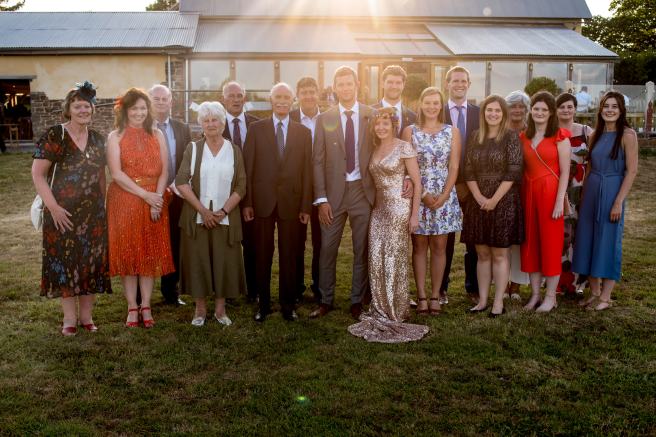 [My brother’s wedding may have been over three months ago now, but this is a day that will remain with me for a long, long time. Besides, we only recently gained access to the professional photos!]