I start the new year with a real sense of happiness and an excitement for what lies ahead, further along the foggy path that I’m on—which is something I’ve never felt before in January.

That’s because I’m in the fortunate position of saying I get to spend each day doing what I love, and I’m excited to see where it goes.

Sure, it’s cliche, but so many people work jobs they aren’t passionate about, or spend their 9-5 unengaged. Worse, they dread the following day. And that can lead to all sorts of problems.

I’m fortunate that I’ve found what I consider to be my dream (“my calling”, as it were) and that I decided to follow it. Now that I’m here, I really don’t know where else I would be. I’m so glad I took that initial step. In the words of Shinedown: The first step is the one you believe in, the second one might be profound.

In short, I’m in a very good place.

After two weeks away from writing (a week shifting turkeys and desserts in an M&S fridge and a week of unhealthy holiday), I was eager to get back to work. No post-holiday blues for me!

I went away with Emily for a long weekend last week, and to the Warner Bros Harry Potter Studio Tour this Wednesday gone, so I’ve yet to have a full week of work, but rather seven days. (Like everyone else, I was also distracted by the snow.) As that’s closer to my usual week of five working days, I’m considering them both as Week 16.

As I spoke about before the Christmas break, I’m starting the year by re-drafting (and, in some cases, re-writing) the 105,000 words I’ve so far written, in preparation for handing out the first fifteen-or-so chapters to my yet-to-be-formed reading circle.

I began with the Prologue and, unlike Chapter 1 which was a complete re-write, this was about 60-40, with the majority being re-write. That’s OK, though. Like Chapter 1, it was the first thing I’d written for nearly a year and it allowed me to dust off the cobwebs.

As it’d been four months since I’d written it, I’d had plenty of time to think about how to improve the writing, from deciding to open with dialogue, to knowing what should be focused on with each character, to their descriptions, to including tension and intrigue, while also losing as many words as possible. (I managed to cut a good 2,500 words.)

I make notes regularly, and add them to my Plot Doc to keep them ordered and together, with the intention of being able to re-draft without forgetting the inclusions I’ve wanted to make, whether I thought of them four months ago or a moment ago. This doesn’t mean I don’t reconsider them, as I often do. Sometimes when you write something you just know how it’s supposed to be.

Afterwards, I re-drafted Chapter 2. I decided to skip 1 until afterwards, as it would mean I’d have longer between writing and drafting. Chapter 3 also continues the same narrative as Chapter 1, so I thought it might help with things like continuity and pace as well.

Chapter 2 was less of a re-write and more of a re-draft, with perhaps only 20% being re-written. This was mainly the beginning, which I re-wrote. Some of the remainder was untouched, but most was edited.

As well as trying to improve the quality, the time away since writing has allowed me to see what is necessary and what isn’t. I also feel I’ve gained a better understanding of how a chapter (and a book) should be written, simply by reading daily, as well as going over parts of previously read books. (In preparation for my re-write of the Prologue, I re-read the opening to Stephen King’s Mr Mercedes, as it was character based with an ominous build-up, much like mine.)

It’s funny that I spent the first fifteen weeks of writing by trying to produce as many words as possible. Now I’m redrafting I’m trying to cut as many words as possible. I don’t mind doing this, and I certainly don’t see anything I cut as being wasted time, as all the words I produce, even those that don’t make even the first draft, have been useful in helping to shape the overall piece.

It’s also nice not be focusing on meeting a daily/weekly minimum word count. As I’m not counting the words, I don’t know if I’m working at the same speed—it does feel somewhat slower—but I’m certainly working with the same attitude. Either way, I feel as if not having a word count to reach keeps me less stressed (November was a bad month), which helps me to produce better work. Whether this is true or not is another thing.

So far I’ve really enjoyed redrafting. Whereas before I had work I wasn’t too happy with, I’m now leaving chapters with an anticipation for them to be read. Even Chapter 2, which I originally felt was strong, I believe is now even stronger, thanks to the redrafting.

My writing and my judgement feel more assured, and I think it’s coming through on the page, ultimately making what I’m producing better. Having the time to reflect and to grow as a writer and a reader has been essential in this.

I’m excited for tomorrow, and for the rest of the week, as it will be my first full week of work this year. Now, time for Sherlock. 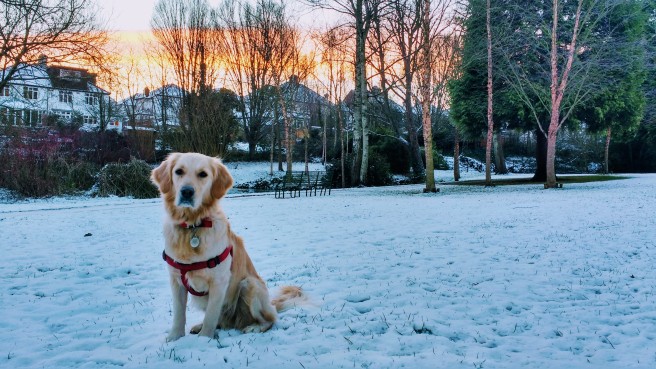 (My secretary, Cass, enjoys her first snow day. After I took this photo, she ran up to me and pawed the phone out of my hand—More snow! More snow!)