As with last week, I’m still editing. I moved onto Chapters 1 and 3—1 needed little work, as it was the last thing I wrote before the Christmas break, so most of this week was focused on re-drafting 3, which continues on from the first.

I say re-drafting, most of it has been re-writing.

Before I began re-drafting, I was worried Narrative 1 would need more re-writing than re-drafting—so far, I’ve been right (obviously), and I don’t expect it to change.

Now, that is. As I said, I was worried. After re-writing Chapter 1 and seeing the vast improvements made to it, I was more than happy to do the same for Chapter 3. More words have probably survived this time around, but not many.

Even though I’m a day or two away from finishing the chapter, I’m feeling it’s my best one yet. I’ve said this several times before, but it’s great to constantly feel as if I’m besting myself.

It’s hard to know if this is actually true or not, as no one other than myself has yet to read what I’ve so far done, but hopefully it’s a good sign at least that I feel this way.

As for the idea of having to re-write the whole of Narrative 1, it no longer worries me as I know I will only be making it better.

Out of what I had so far written, I felt as if Narrative 1 was the weakest (and, if I’m honest, the most poorly written). I couldn’t tell you why, except for the fact it was the most complex, and involved the juggling of quite a few characters and important details.

Of my 67 page Plot Doc., seven of those pages are about Chapter 1. It has far more notes than any other (most average half a page to one page). Until I re-wrote it, I considered it one of my worst, if not the worst.

I read an interesting article this week, discussing two approaches to writing from George R.R. Martin. He said:

Perhaps the most famous example is J.K. Rowling, who spent several years planning the entire Harry Potter series before she began writing the first book. Martin, however, says he is a gardener:

“The gardeners dig a hole, drop in a seed and water it. They kind of know what seed it is, they know if [they] planted a fantasy seed or mystery seed or whatever. But as the plant comes up and they water it, they don’t know how many branches it’s going to have, they find out as it grows.”

(If you’re interested, this article is of a similar discussion, again using J.K Rowling as an example for the plotter and Stephen King for the Pantser.)

I would say now that I’m the latter—even though when I started out I was sure I would be the former.

Being a first time (and, currently, amateur) writer, I’m doing everything by trial and error. I tried the plan-as-much-as-possible approach of the Architect, as I’m the type of person who likes to have things organised and to know what is going where, when, how and why. I also thought it would make my writing better.

I feel Narrative 1 was the most poorly written and the narrative I struggled with most because it was too planned, whereas for the other chapters and narratives (which I thought were much better) I had vague ideas and the odd super-important detail I knew I had to include—though most of those came around organically during writing.

I enjoy the writing most when I’m exploring the story as I go along, by using my vague ideas and seeing how they form on the page (well, screen). This is also what Martin said about his gardener approach:

“As you know, I don’t outline my novels. I find that if I know exactly where a book is going, I lose all interest in writing it. I do, however, have some strong notions as to the overall structure of the story I’m telling, and the eventual fate of many of the principle characters in the drama.”

While I know the overall outline of Everborne and wouldn’t be able to write without it, I think that’s the right amount of planning for me, and any more would be counterproductive. Though only in terms of story and plot. When it comes to world-building and character profiles etc., that’s another matter. However, even with characters, I feel some of my better characters have been created when I knew little or nothing about them, compared to those who I’d written character questionnaires on.

I should mention that I’m still making notes on the chapters as I write them, but these ideas are more organic as they are occurring during the time they’re being written.

As I re-wrote Chapter 3 this week, I decided to eliminate one character’s introduction whilst introducing another. I only decided how I would introduce this other character the night before I then wrote the scene. There was no planning, other than knowing it would be a conversation.

I guess I’ll find out in a couple of months, when I issue the first draft to my reading circle. Eek!

Now that I’m editing I’m no longer forcing myself to hit word count targets, and, as a result, I feel the results are a lot better. I said that about the Chapter 1 re-write and what I worked on last week. I’m also a lot less stressed.

What’s the point of writing 30,000+ words a month for over three months if I’m then going to spend two more months afterwards trying to remove 30,000+ of those words?

When I come to continuing writing after my first drafting stage, I think I may scrap the daily, weekly and monthly targets. In three-and-a-half months, I’m sure I could produce 70,000 better written words, opposed to what I could produce in twice that time if I gave myself targets. 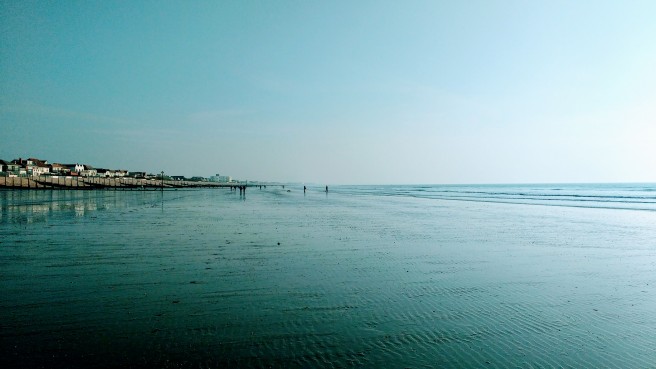 Hi, I’m Tom, a half-giant currently living in Chichester. Join me as I pursue my dream of becoming an author—my aim for 2021 is to have some of my short stories published and to finish the first draft of my novel. When I’m not talking to imaginary people or staring optimistically at a computer screen, I like to read, scoff coffee and walnut cake, and walk my Golden Retriever, Cassie. View all posts by Tom Luck